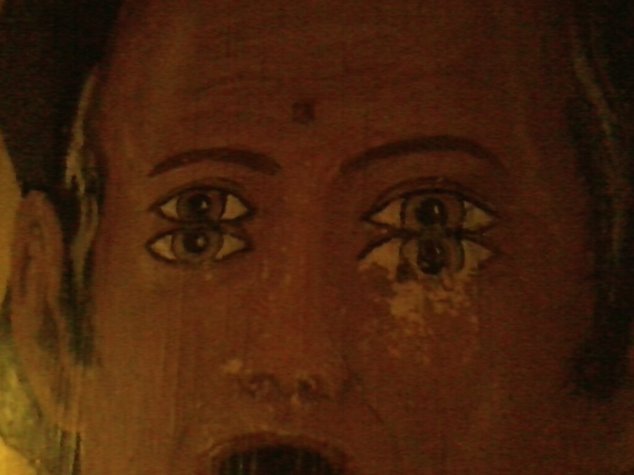 He storms off to the car, but them comes back and picks up our daughter and carries her because we are moving too slow for him. He’s not rough at all, but that rigidness is back, he emanates anger, and she starts crying again. All the way back he barks out orders on how and where to drive to me. As you’ve probably guessed, I do know how to get to my own house. But this, this is the kind of shit I just take from him. Because when he gets like this, there’s no rationalizing with him. I consider pulling over and telling him to get out of the car. To just walk home, and that I will ensure that the friend and I get his truck dropped off at his house later. But I feel like this might be even more upsetting to our daughter, than watching his behavior. then both parents are acting cagey. And what do I do if he just sits there and refuses to get out of the car? I start to make small mistakes while I’m driving–like hesitating as a light turns yellow, because I’m under this constant barrage. I’m under attack–how do you focus? He yells at me when this happens. I really can’t explain to you what it’s like. For some reason, people think that people in a manic state are happy, or at least harmless to others. They never imagine an aggressive manic state. I think they use these methods to interrogate prisoners of war, to break them. I can’t even respond to one complaint before he’s cut me off with another, unrelated. And he acts like I’m crazy when I try to get him to pause and back up, and let me finish with the first. “What are you talking about? We aren’t talking about that. What does anything you’re saying have to do with what we’re talking about? ” As far as I can understand, he doesn’t perceive these episodes that same way everyone else does. I think he sees everything happening more slowly, and as not being disjointed. Later, he says he doesn’t remember times like this. If he does at all, he calls them “arguments.” He says, lately, all we do is argue. It doesn’t feel like an argument, because aren’t there supposed to be two sides to an argument? Recently a friend witnessed a less severe episode. A little while after it happened, he referred to it as an “argument” and the friend called him on it –said, “What are you talking about? That didn’t look like an argument to me. That just looked like you complaining about something that didn’t make sense.” That friend has no idea how much they did for my sanity right there. But He, my poor bipolar heart, he was genuinely confused, and maybe a little hurt that his friend was “siding against him”. He has really been convinced that these are normal two-way arguments. He really doesn’t perceive things the way everyone else does. I remind myself of this. Don’t take it personally.

I keep telling myself that it’s going to be OK, because as soon as we get to my house, the friend with the truck will be there and he will go home. I feel terrible because this is the man I love and right now I just want him away from us. I just need some peace. God, please, just a few hours to regroup. And every time I think these things I feel so bad, too, for so many reasons. what kind of partner am I? So much for better or for worse, in sickness and in health.

It’s not to be though. The friend is running late. The barrage continues. In my own home, in my sanctuary. I consider taking our little girl and leaving him there alone to wait for his truck. But I am afraid of what he will do to my house, to himself. Mostly, I realize he will just follow us. His Monster won’t let his victims get away so easily. He completely rearranges and moves my audio video collection. He ranges through the house, collecting things that he feels are “his” into a pile in the middle of the living room floor. He shakes his fist threateningly at me when I offer to fix him something to eat. All while the complaints about me and anything to do with me or anything else in the world–all which he finds some way or another to make my fault just keep coming. I finally calm him a little by putting stupid 80s comedies on the television. It doesn’t exactly make it better, but he is easily distracted. When he starts up again, I laugh and point something out from the show and he gets lost again for a little while. I get him to eat by fixing something for our daughter that she doesn’t want. I fix her something she does want, and oh-do-you-want-this? Otherwise-I’m-just-going-to-have-to-throw-it-out. Eating does help a bit. When this first started happening, I even got him in to have his blood sugar checked, because the food factor made me suspect diabetes. I guess everyone’s just grouchier with an empty stomach?

Finally his truck gets here. He scoops everything up that he’s piled in the living room and throws it in his truck. I help him. I God-damned help him because it’s just stuff and I need him to leave. And I feel so God-damned bad. Because this is, really is, still the love of my life, and I’ve given up. I want him to leave more than I want to help him any more. At least for tonight.